skip to main | skip to sidebar

I read a fair bit - at least by most people's standards. And I watch quite a few films. And the vast majority of what I read/watch leaves me feeling just so-so. Take it or leave it. Though now and then I'll think something is good. Maybe very good. Five-stars-out-of-five good.

And then - very, very occasionally - you come across something which is another-order-of-magnitude good. Something which just takes your breath away and doesn't give it back until you turn the last page or watch the closing credits roll up in front of you. And you realise that what it's all been for. That's why you've ploughed through all those novels or sat through all those movies. To get to here.

Last year I got there with Victor Pelevin's The Clay Machine Gun. Last night I found myself there again when I watched a film I knew nothing about - I had simply popped it onto my Lovefilm list after seeing an interesting review. Magnolia. Where was I in 1999 when this was released? What was I doing? How could it possibly have come to a point where, nine years later, I'd never even heard of this film?

I won't even try to describe it to you - beyond saying that it follows the interlocking lives of a series of characters in Los Angeles - but it was absolutely captivating. Several minutes into the opening montage I had that feeling of absolute 'rightness'. That sense that there was absolutely nothing in the world I'd rather be doing at this moment than sitting here, laptop propped up on my knees, watching what was unfolding in front of me. And three hours later (yes, it's long, but then, hell, so is War and Peace) I was still captivated. And open-mouthed. Literally. Towards the end my jaw actually dropped, I was so astounded and moved and transfixed by what was happening on the screen.

This is a work of consummate genius, at once puzzling and heart-rending and wise and funny and tragic and uplifting. The acting is astonishing. I've never been a particular fan of Tom Cruise but in Magnolia he proves he's more than than just a pretty face with one of the most powerful performances I have ever seen. The musical score is hypnotic, and the frog scene is probably the most dramatic use of special effects in cinema history.

If only everything in life were this good.
Posted by Muvva at 09:58 No comments:

OK. I've deleted Minesweeper and every form of patience game from my laptop. I have strictly forbidden myself ever to go on Puzzle Pirates again, after losing a whole day to it some months ago. I have resisted loading in SimCity or even the kids' Zoombinis game.

But I stumbled on this today: www.timesspellingbee.co.uk

Will somebody come straight round and press control-alt-delete for me please?
Posted by Muvva at 08:45 2 comments:

I'm not watching much TV these days - six months without one seemed to snap me out of my addiction of lying half comatose in front of the box for three hours an evening. And truly half of what's on there is rubbish. Freeview has given me access to god know's how many channels, and there's rarely anything I want to watch on any of them.

And then suddenly you discover something so wonderful, so exquisitely produced, so lovingly crafted, that it makes you want to weep. In this case I am talking about BBC4's current series, Picture Books, covering the history of children's writing from picture books to teen fiction.

Catch up with an episode on the BBC iplayer - assuming you've not caught it already - and you'll see what I mean. Amongst other things, the series is a homage to great children's illustration - original drawings from various classics form gorgeous backdrops behind the commentators in some scenes, while in others the camera pans lovingly across the artist's images. It makes you want to run out the room and root out your old copies, to feast your eyes all over again on John Tenniel's illustrations for 'Alice in Wonderland', or E H Shepherd's for 'Wind in the Willows'and 'Winnie the Poo'.

Simply unmissable for anyone with a passion for children's literature - or for that matter anyone lucky enough to have had these books and images form part of their childhood mental landscape.
Posted by Muvva at 05:25 No comments:

Second son, clutching the adaptor plug to his digital radio.
“Look, Mum, I put my tongue on the end here and I got a really bad electric shock. Even though it’s not plugged in. Look.”
He puts the plug to his tongue. “Aaargghhh," he yells, "That REALLY hurts!”
He does indeed look pained.
“Look. I’ll do it again.”
He does it again. More squeals of agony.
When he's recovered, he hands it to me. “Go on, you have a go.”

Can you believe this child is nearly 15?
Posted by Muvva at 04:05 No comments:

Not barking, but howling

Got that? Not interested, as opposed to impartial. Please try to remember it. Please.
Posted by Muvva at 06:36 1 comment: 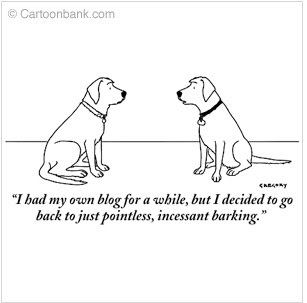 Muvva
What do you want to know? OK, the facts: I'm 47, mother of four, ex-journalist/writer (British nationals, but just got fed up with it; otherwise publication credits include one picture book and about half a dozen non-fiction books for teenagers, the kind you find lingering unread on the shelves of school libraries). Now would-be fiction writer, currently cohabiting with my partner J on the Devon/Dorset border.

Heavily biased towards writers, but still....